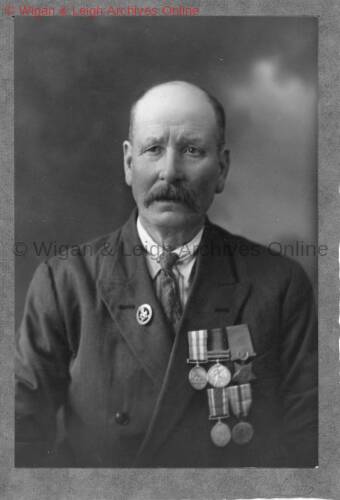 Click the image above to see in more detail.

Stretch/Pinch the screen to zoom

Ron Meadowcroft has allowed us to reproduce this digital photograph of his grandfather Joseph Wagstaff, one of the guards at the Leigh Prisoner of War Camp. Ron has also kindly supplied the following information regarding his grandfather Sergeant Joseph Wagstaff who was posted to the camp on 28 June 1917. The information has been taken from an article published in the Derby Telegraph on 24 August 1936 for Joseph’s Golden Wedding Anniversary.

Ex-Sergeant Joseph Wagstaff, a veteran of three wars, of 202, Abingdon Street, Derby, celebrated his golden wedding in 1936 with his wife Charlotte Wagstaff. The couple were originally married at St. Chad’s Church, Derby in 1886.

After completing his full-term of service, he was employed at Rolls-Royce, Ltd. in Derby and was working there when war broke out in 1914. Joseph volunteered for the Sherwood Foresters but was rejected because of his age. Joseph was determined to enlist and he travelled to Oldham and enlisted as a private in the Lancashire Fusiliers. He gave his age as ten years younger than his true age of 57. Three days later his old commanding officer learned of his enlistment and was responsible for his promotion to his old rank of sergeant.

Joseph was sent to Egypt and the Dardanelles as part of his overseas service. Invalided home in 1917 he was placed in charge of prisoners at the German Prisoner of War Camp in Leigh, Lancashire.

Joseph was awarded two more medals; the 1914 medal and the Great War medal.

Joseph remained active and in good health, one of his main interests was the Derby branch of the South African War Veterans Association, and he travelled to all parts of the country for meetings.

His wife Charlotte was formerly Miss Torr of St James Road in Derby. The couple had five daughters, all of whom were born in barracks, eleven grandchildren, and three great-grandchildren.

At a family tea party to mark the Golden Wedding Anniversary there was a cake on which was iced the badge of the Sherwood Foresters Regiment. In the evening a celebration was held at the Norman Arms, where 50 years ago the wedding breakfast was held. The top tier of the cake was presented to the Sergeants’ Mess at Normanton Barracks. 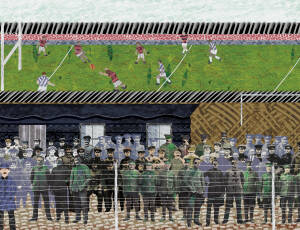